Back to all posts

Hello folks! April is now here and as I’m writing, the snow outside is very slowly but surely melting away, preparing for spring’s welcome. As I live in Finland, this winter was a long one. As an April child, I’m very much looking forward to the warmth that spring has to bring.

Two of the things that I enjoy the most are connecting and keeping in touch with my dear supporters that encourage my creating, and writing. So with that, I decided to finally explore the option of staying in touch via a mailing list. I feel that it’s a more direct and personal method of connection than simply posting posts on social media into the ether. I also get to write in a less general, more personal and private manner this way. On top of that, I can include interesting content such as free music downloads, as well as a peek into upcoming, unreleased or private creations! If this is something you’d like to be a part of, you can sign up to my mailing list on the main page of my website. You can expect emails approximately once a month, and it would be both my honour and my pleasure to be able to stay connected with you on my musical journey!

Speaking of which, I released my first musical moment, Memoria. Captured in this moment are three instrumental songs that I composed, with strong feelings of nostalgia, a relaxed atmosphere, and an emphasis on the beauty of melodies in composition. I have often written music to support my voice, so that I have something original to sing. I was feeling very inspired by much instrumental music, from video games such as Japanese role-playing games from the 80s and 90s, The Moomins series, as well as that of artists such as Kitaro, Yanni, Vangelis and Enya. I wanted to properly put my composing to the forefront for a change, rather than my voice.

The first song “The Moon Beneath the Water” was actually very much inspired by the art, created by the incredible artist stilleri who I began working with this year. The idea for the art came after the idea for the musical theme, but the music came after the art, so I’d say that the visuals and the music very much inspired and guided one another. In this track, I was particularly inspired by the fantastical atmosphere of the underwater, and the music brings to my mind the coral reefs and the floaty, glowy nature of jellyfish, and how they would shine in the moonlight of an underwater moon.

“The King’s Ruby” was inspired by the world of The Moomins, particularly the 1990 series. I was watching it a lot in Finnish with English subtitles, back when I was in the midst of really learning Finnish. That’s when I really fell in love with it… somehow, I felt that I was watching something so nostalgic that it felt as if I had watched it in my childhood. I wanted to capture that same nostalgic feeling in this track, as well as the two others on Memoria. The King’s Ruby, or kuningasrubiini in Finnish, is actually an item from the series. It is said to have shadows and flames dancing inside of it, and the Hobgoblin and his panther are hunting for the ruby – so I added a bit of action into the composition to reflect the chase for this majestic object!

The third song is “The Mirror Realm” and is the most ambient of the three I would say. I don’t think I have created a song that is so heavily percussive, and I really love bell-like melodic percussion. I wanted to capture the magical feeling of reflection and rays in this song, and a floaty feeling with the sensitive woodwinds and atmospheric pads. When I listen to it, everything feels like it’s working together adjacently in satisfying harmony, similarly to how a mirror reflects that which is facing it. There is something about these types of instruments as well that appeals to my sense of nostalgia. Perhaps it comes from the types of sounds one might hear often as a young child, from lullabies or from toys.

For each of these songs, I thought it would be a nice idea to feature them as 1 hour looped versions on my YouTube channel. I personally really enjoy getting lost in looping relaxing music, and I thought that each of these three instil a suitable sense of tranquillity that would lend itself well to those types of videos. Pairing these with the landscape version of the art and animating it to bring it to life was a lot of fun, and it felt like I was creating a world of Memoria with them!

I think that is all I wanted to write for today’s update, but I hope everybody is finding joy and peace in this 2022. I think we could all use some peace, perhaps now more than ever. 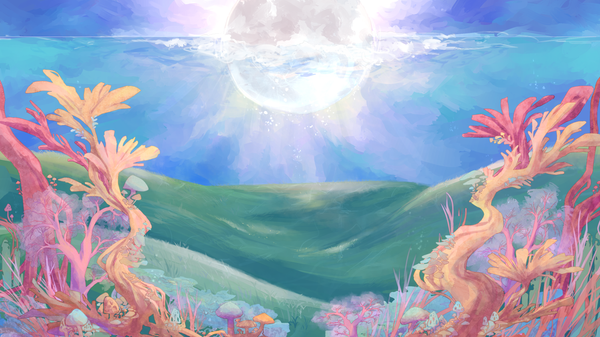